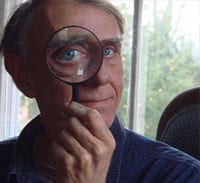 Harry Orlyk was born in Troy, New York in 1947. In 1971 after graduating college, he went on to graduate school at the University of Nebraska at Lincoln. Over the next nine years, he was influenced by several Nebraskan artists. “Still-life painter Robin Smith taught me how to use paint without turpentine – to paint from the tube.” He also admits the influence of photographer Lawrence McFarland who taught him what spiritual space was, and how to emphasize it. Lastly he credits well-known Lincoln painter Keith Jacobshagen with having impressed on him the importance of routine. He currently resides with his family in Salem, New York, near the Vermont border. 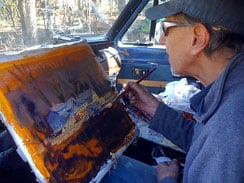 “A quarter century of painting has been an act of the imagination to determine who and what I am with respect to the earth and sky. Process, rather than product oriented, searching for the daily painting, has become a way of living in relationship with the earth. To become a human being, a part of nature rather than someone separate observing it from the outside, like hunter-gathers, I am led from one opportunity to the next, being directed by seasonal stages. The relationship has become the trust I give it to show me where my next painting will be. Each painting entails facing a swath of creation and observing something of its story, becomes a long log of small truths.”

Living in the moment… 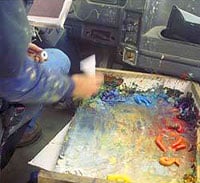 “Sitting in the cold in a traditional way, I paint what is before me, sometimes as still as the Eskimo who earns his family’s meal by waiting and watching and thinking. He kills an animal; I make an image. We are linked together by our years of long studied views across a common land. I am so cold sometimes with the windows of my black Dodge van rolled up tight (I never turn on the engine once parked to paint, afraid of carbon monoxide). In a cold-induced trance, painting continues all by itself. Often the final dim presence of light exits while both hands are still at work and I do not know what I have made until the painting is brought into the light of a room.”